Makerspaces? Where the creative magic happens 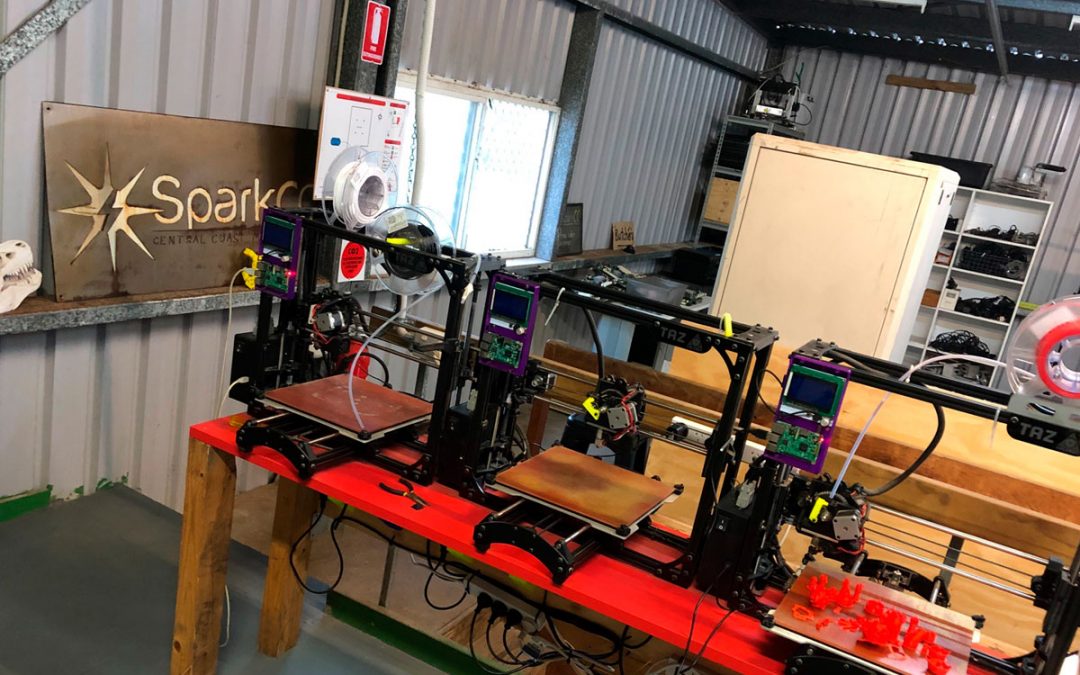 There are weird and wonderful things happening in makerspaces in New South Wales – and they’re not always the things you’d expect. From the quirky to the downright profitable, many of these spaces are transcending their humble beginnings to become hubs of innovation and creative entrepreneurship.

At a Meadowbank workshop, one man is trying valiantly to make bread as good as bread can be.

“He’s ripped out the guts of his bread maker and replaced it with a microcontroller,” says Gavin Smith, co-founder of the Robots and Dinosaurs makerspace in Sydney’s northwest.

Such is the unique and surprising world of makerspaces, where creative thinkers come together to test, refine and grow their skills – often with surprising results.

The maker movement is based on a community-led approach that brings hobbyists together to share knowledge and collaborate on a range of technical and creative projects. It also gives people access to large and/or expensive equipment that they wouldn’t be able to access otherwise.

“The second reason is you like making things and you like talking to people and getting that cross-pollination of ideas, so there’s a very big social aspect to it as well. They go hand in hand, because you can’t really get the community without the tools, and there’s no point having the tools if there’s no community.”

Robots and Dinosaurs, or Robodino, as it’s affectionately known, is home to an eclectic mix of members with interests that span everything from electronics and coding to glasswork, textiles (there’s a spinning wheel in the space), resin casting, woodwork, metalwork and more. Almost all its members are hobbyists – they pay a monthly membership fee and all their projects are self-directed.

But even in such a casual environment, being surrounded by such eclectic expertise means that members benefit from knowledge sharing and opportunities for collaboration that they may not have access to elsewhere.

“It’s like a library – you can’t go to a library and say, ‘I want you to teach me this,’ but you can go and get access to resources and possibly meet some other people who are interested in the same thing,” Smith says.

In Gosford, on the Central Coast, a makerspace called SparkCC is straddling the divide between community-led making and entrepreneurial practice. The space, which has something of an unintended tech focus –“that wasn’t deliberate; it’s more been driven by the people we’ve attracted,” says co-founder James Stewart – is extremely collaborative. Like Robodino, members devise their own projects but often call on the skills available in the space to really get things going.

It’s collaborations like these that led to the first-ever commercial venture to come out of SparkCC. Called Aiqua, the start-up was established by two of the makerspace’s members, one with a big idea and the other with the technical skills to see it through. The result is Aiqua’s first product, an automated, digital swimming pool water testing device, that will be the focus of a Kickstarter campaign later this year.

“They’ve literally gone from prototyping in a makerspace to actual manufacturers in China making commercial things for them,” Stewart says.

At the other end of the makerspace spectrum are dedicated commercial ventures like Marrickville’s Makerspace & Company. This multidisciplinary creative space offers the trappings of a traditional makerspace venture, including equipment and studio space for ceramics, wood, metal, textiles and print, as well as events, classes, networking opportunities and studio tenancies that are designed to support entrepreneurial creators.

Rather than offering casual memberships where makers can show up to work whenever the mood strikes them, the organisation is gradually shifting to a model that encourages makers to take up term-based memberships and studio tenancies. Hobbyists are still welcome but will have access to the space through events, classes and tutored sessions led by experienced makers and artists, rather than through casual studio time.

“We want to make sure that the space, the tools, our offerings and levels of access provide something that makers in Sydney actually need – the more entrepreneurial side of making, product design and prototyping,” says Kris Spann, the incoming director of Makerspace & company who’s also an entrepreneur in his own right.

New opportunities for creators and makers

The result is a space with a firm focus on the creative industries and on transforming creative practice into viable businesses and products. Tenants include puppet-makers, set and lighting designers, screen printers, ceramicists, furniture designers and woodworkers, to name a few, many of whom are working on commercial opportunities, as well as other practitioners who are in more of a discovery phase when it comes to their creative practice.

The model is a great fit for Sydney, Spann says, where apartments are small, rents are astronomical, and makers who are working towards a commercially viable product often have nowhere to ply their trade. It’s also starting conversations about the role of making in shaping a city.

“We’re all about having an entrepreneurial mindset, people who really want to shake things up and try things and engage with more idealistic practices,” Spann says.

“We’re challenging Sydney to do stuff that means stuff.”

Spaces to play, make and create