Re-thinking fashion design, one shape at a time 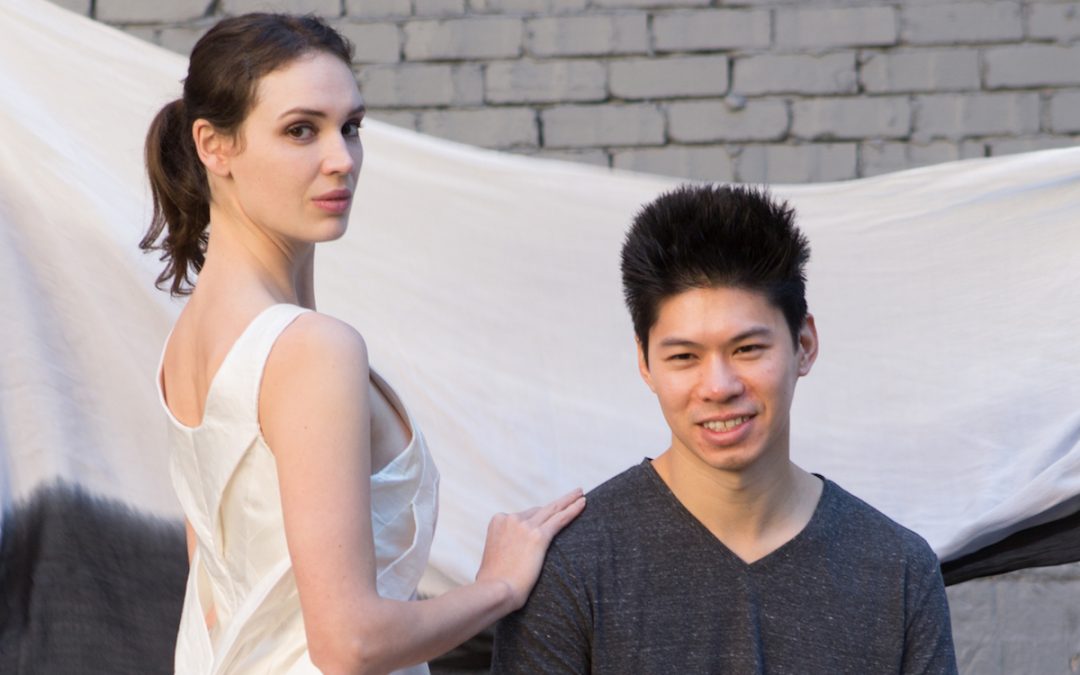 Mark Liu is shaking things up. The sustainable fashion pioneer, entrepreneur and award-winning founder of the Mark Liu label is pushing the boundaries of the fashion industry – and it’s all thanks to an approach to sustainable design that’s based entirely on mathematics.

“When you learn to become a fashion designer, you get a tape measure, you measure someone’s body and then you draft these patterns down and make a piece of clothing. And usually, when you put it on the body, it doesn’t always fit perfectly, so you have to adjust it,” says Liu, now a Chancellor’s Postdoctoral Fellow in the Faculty of Design, Architecture and Building at UTS.

“A few years ago, I asked the question: why can’t we just get the thing to fit the first time?”

It was a question that changed the direction of his career.

Looking for something more

In the early 2000s, Liu was one of the darlings of the London fashion scene. He’d graduated from the UTS Bachelor of Design in Fashion and Textiles, finished a postgraduate qualification at Central St Martins, interned with leading labels like Alexander McQueen, launched his own label and shown his collections at London Fashion Week – all before he turned 25.

“When I first started in the fashion industry, things were much more clear cut. You started a fashion label, you’d create a high-end fashion collection, and then you’d go to Fashion Week and that was the greatest thing you could possibly achieve in high fashion,” he says.

But reaching the pinnacle of his industry wasn’t enough. Instead, Liu was distracted by the increasing environmental impacts of his industry – the excessive use of resources, extreme waste, and the alarming regularity with which its outputs were winding up in landfill.

He started experimenting with sustainable approaches to fashion, devising a zero-waste patternmaking process in which he’d visualise the pattern as he developed it and arrange components of the pattern like a jigsaw to minimise leftover fabric offcuts. It was a highly mathematical approach – and Liu was hooked.

“I was learning about the underlying science of sustainability, and it was much more complicated than what was being expressed in popular culture,” he says.

“I kept on pushing the boundaries of zero waste design, and the more I did it, the more mathematics I was doing. It hit a point in time where I could see something bigger emerging from my work.”

In the end, something had to give.

“I was spending a lot of time running the fashion label, but I wanted to spend more time doing the research, so I made a crazy decision to come back and do a PhD in fashion and look at the underlying geometry of how fashion is made,” he says.

Applying a research approach to fashion

Today, Liu is applying his expertise in fashion design to a program of research at UTS as a Chancellor’s Postdoctoral Fellow in the School of Design. As part of a PhD on the geometry of patternmaking, he produced the drapemeasure™, a tool that integrates spherical and hyperbolic geometry into traditional patternmaking processes.

“The geometry of curved surfaces is actually very technical, so the difficulty was taking such technical mathematics and making it easy enough for a fashion designer to understand,” Liu says.

“You can put the drapemeasure™ on parts of the body that are spherical, so the shoulders or the bust, or you could put it on places like the underarms or in the crotch, which are hyperbolic or a sort of saddle shape.”

As well as radically simplifying the patternmaking process, the drapemeasure™ can also interface with technologies like 3D scanning and printing, placing it at the forefront of a new era in which clothes will be made to suit the measurements and preferences of individual buyers.

It’s great news for the planet, and for the established creatives and emerging entrepreneurs who are shaping the future of fashion.

“If you had garments that were actually fitted and made for an individual, maybe you could get rid of some of the mass production,” Liu says.

“Hopefully we can use it to micro-manufacture something closer to home, and just manufacture what we need instead of making vast quantities of stuff that will end up being dumped in landfill.”

More recently, Liu has been conceptualising sustainable next-generation textiles, such as those derived from algae. He spoke about this work as part of the Algae is the New Black panel discussion at Vivid 2018.